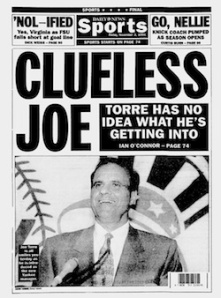 “Clueless Joe” is now in Cooperstown

Joe Torre, who was famously dubbed “Clueless Joe” by the New York Daily News, was enshrined into the baseball Hall of Fame yesterday. Turns out Torre DID know what he was getting himself into, and may have managed the last great dynasty we will see in baseball.

Many forget just how good of a player Torre was before his managerial career ever began. He was a 9-time all-star, who won the batting title and NL MVP award in 1971, while playing for the St. Louis Cardinals. Despite having a great 18-year career, it was as a manager that he really left his mark on the game.

Torre first got his chance to manage in 1977, as he served as a player/coach for the New York Mets in the final year of his career. Torre went on to coach the Mets for the better part of 5 seasons, where he received poor results, due mostly to the lack-luster roster he was given to work with. From there, he went on to coach the Atlanta Braves for three years and the St. Louis Cardinals for six years. There his teams improved, but was still unable to turn any of them into a real contender.

Cue 1996. The Yankees were coming off back-to-back strong seasons, and had a young core in place to build around. George Steinbrenner made a highly questionable move when he hired Torre in to take over at the helm, considering he had winning seasons in only 5 of his 15 years as a manager. Nonetheless, it quickly became apparent that he was indeed the right man for the job. In his 12 seasons with the Yankees, his teams won 10 division titles, 6 pennants and 4 World Series championships. All the while putting up with the daily scrutiny from the NY media and most importantly, Steinbrenner himself. Torres’ tenure with the Yankees will long be remembered as one of the greatest stretches in baseball history.

After moving on to manage the L.A. Dodgers to put an end to his stellar career, Torre finished with 2,326 games won as a manager, good for 5th all-time. Congratulations and welcome to Cooperstown, Joe Torre.

Watch his Hall of Fame speech in its entirety below: 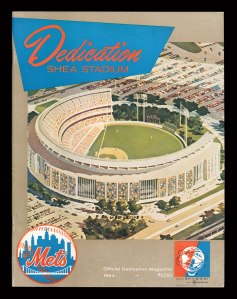 The Mets recently announced they will be selling tickets to this weekends series against the Braves with rates honoring the 50th anniversary of Shea Stadium opening.

There will be a limited number of tickets available in the upper deck for $3.50, which is what an original box seat cost in 1964. On top of that, select field level seats will be priced at $19.64. Both specials will be available for all three games this weekend, but keep in mind they may go fast at those prices.

I’m glad to see the Mets running such a great promotion, this is something the team has been getting much better at in recently. A lot of that undoubtedly has to do with the team’s performance on the field, as many don’t want to come watch a losing team. But despite struggles the last few years and a mid-level payroll, the team is on the rise and does have some young talent to get excited about. Now it’s time to win their fan base back and remind them how great Citi field is, these type of promotions can help do just that. END_OF_DOCUMENT_TOKEN_TO_BE_REPLACED 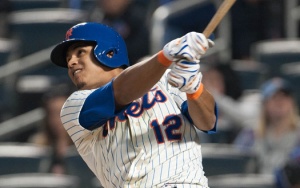 Everyone knew what Juan Lagares brought to the table defensively, but the question remained as to what he would bring with his bat. There were grumbling all of spring training in concerns to if Lagares would hit enough to be an everyday player. So far, he has put all of those concerns to rest. It’s not just that he’s hitting, but it’s when he’s doing his damage.

This franchise has lacked players that come through in the clutch for some time now, and in a small sample size, Lagares looks like one of those guys.

END_OF_DOCUMENT_TOKEN_TO_BE_REPLACED

Bartolo Colon is a role model to every beer bellied man around the world. With every start he makes, every fan shakes their head in disbelief that he is a professional athlete. Colon look like a guy that belongs in the PBA, not the MLB. Nonetheless, he continues to prove us all wrong as he continues to succeed.

The best part about watching this 40-year-old beer league lookalike, is his carefree attitude on the mound. He simply stands there and throws his pitch moments after the batter steps in the box. No wasted time here. When a batter steps out to tie his shoe, redo his gloves, take a million practice swings, etc – What does Colon do? He throws the ball up in the ball and plays catch with himself to kill time. Gotta love it. END_OF_DOCUMENT_TOKEN_TO_BE_REPLACED 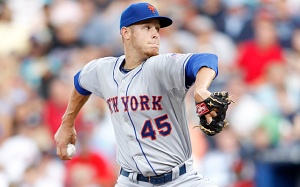 Zack Wheeler makes his much-anticipated home debut today against the Nationals. This will be his third career start but his first in front of the flushing faithful.

A lot has been made of Matt Harvey’s starts, with each one being labeled “Harvey Day” and rightfully so. They have  become an event of sorts to see what the young ace will do next. Now with the recent promotion of Zack Wheeler, the Mets hope a similar trend will begin to take place.

We have already seen signs of greatness, despite the mixed results in his first two starts. In his major league debut, he threw six shutout innings with seven strikeouts against the division leading Braves in route to earning his first career win. It was a terrific debut  as he lived up to the hype that had been surrounding him since the Carlos Beltran trade was made two years ago.

His second start didn’t go quite as smoothly. Wheeler lasted 5.1 innings allowing four runs with just one strikeout. Although this wasn’t a terrible start, it wasn’t great either. He was all over the place with his pitches and it has been reported that he was tipping his pitches. Both of which are things that I would be worried about if he were a veteran, but I won’t stress after just two starts.

What I took away most from Wheeler’s starts are his ability to get by without his best command. Wheeler has walked eight batters in his first two starts, but has only allowed eight hits as well. This give you an idea of how good his stuff is. Besides the one hanging breaking ball White Sox catcher Tyler Flowers took him deep on, you don’t see batters squaring up on the ball against him. This could be a telling sign that once Wheeler gets the full command of his pitches he could quickly become a dominant pitcher.

I expect the nerves might get to him again today, making his first start in front of the home crowd and all. But I look for him to settle in sooner rather than later and attack the strike zone. With the ability to throw in the high 90’s, he has no need to be pitching around the plate with the swing and miss stuff he possesses.

One thing I always enjoy doing at Mets games that I don’t think enough fans take advantage of is to head down behind the bullpen while the starting pitchers warm-up. It’s right in front of the center field entrance and gives you a great view of warm ups. You get an up close look of just how hard these guys throw and how incredible their breaking balls are. I’m looking forward to grabbing a spot early and watching Wheeler throw a bit before heading to my seat.

Today could mark the first of many “Wheeler days” at Citi Field, as he and Harvey are making at least two games a week must watch TV. With it being a Sunday afternoon game, David Wright bobble head day and Wheeler’s first home start, I expect a good crowd to be in attendance today.

Happy Wheeler Day? Hopefully something more trendy will come about.