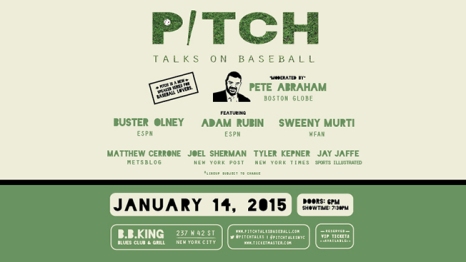 Last night I attended Pitch Talks at BB Kings in NYC. For those of you unaware, Pitch Talks is a segmented event of national and local sports writers/personalities to talk baseball. This is the first one of their events I have attended but from what I gather this is a traveling show of sorts with the participants changing based on location. It’s events like this that remind me just how lucky I am to live in the most powerful sports market in the country. We were spoiled with some of the most prominent people in the industry to entertain us with baseball talk, in the middle of January.

Pete Abraham (Boston Globe) played the master of ceremonies role as he moderated all three segments. The night started off talking about the game on a national level with panelist Ken Rosenthal (Fox Sports/MLBN), Buster Olney (ESPN) and Jay Jaffe (Sports Illustrated). Given the timing of the event it was no shock that the Hall of Fame was a focal point of discussion. It was made rather clear that all three have a problem with the voting process and it sounds like changes will be heavily discussed going forward. Whether it be the removal of the character clause, increasing the amount of players you can vote for or the amount of years players can remain on a ballot remain to be seen.

There was no argument that given any unforeseen event Mike Piazza will get elected next year. Rosenthal believes that this will open the flood gates to allow other suspected, but not proven, PED players to be elected going forward. I still want to hold out hope that Piazza is clean, but I understand the point. Jaffe refrained from using too many sabermetrics last night which disappointed me a little as I enjoy watching traditional writers debate new age thinking. I was happy Jaffe was quick to shut down the notion that Pete Rose is no different from the PED guys. As he said, it’s “Apples and oranges” – he broke the golden rule and should never be allowed in.

When it came to Rob Manfred taking over for Bud Selig as the new commissioner, no one felt much would be different. He was groomed for this position under Selig and is suspected to have similar beliefs on how the game should operate. One thing mentioned to keep an eye on was the pace of play. Olney believes that it is only a matter of time until a pitch clock is inserted.

All three of them wanted to see the game market their young stars better and they couldn’t be more right about this. I think the NBA might do this better than other league. They do a great job marketing players in the smaller markets and turn them into household names. Just think Kevin Durant (Oklahoma City) and Anthony Davis (New Orleans). MLB is doing terrific locally but they need to take a page out of the NBA’s playbook and promote their stars on a national level.

Next up was the Mets segment where Olney stuck around and was joined by Matthew Cerrone (MetsBlog) and Adam Rubin (ESPN NY). As a shocker to no one, the Wilpons and the SS position were the hot topics. Olney and Rubin reiterated that the Mets payroll is what it is. There is no reason to believe it will be changing anytime in the near future.  It was suggested that the Wilpons long ties with Selig will holdover with Manfred taking the reigns. You could see the genuine disgust in Olney, and Rosenthal in the previous segment, over the lack of Mets payroll and efforts to act like a major market franchise.

Every time Wilmer Flores or Ruben Tejada were so much as mentioned you could hear the snickers in the crowd, I chose just to shake my head. In order to become a real contender they believed the Mets need to pull the trigger on an Ian Desmond type of player. Although I have been hesitant myself to give up our pitching prospects, last night started to sway me. It is all but a given at least half of those prospects will either not pan out or go down due to injury. This where the highly touted minds in that front office need to earn their keep and decide which are the ones the Mets should be willing to part with.

It was mentioned that the feeling around baseball is that the Mets feel they have to win every trade. Of course I understand that to a certain extent, especially when you are in rebuilding mode. But if you are going to sell the fans on the fact that you are trying to win now, you have to take a chance once in a while and give something of value up to fill a void. That is the conundrum the Mets front office currently faces. Everyone seemed to be in agreement that the Mets will be above .500 this year, but no one saw them as anything more than “in the wild card hunt” as the roster currently stands.

The evening finished up with a “Bronx Banter” discussion when Jaffe returned with Sweeny Murti (WFAN) and Tyler Kepner (NY Times) filling out the group nicely. There wasn’t any “core four” talk and it was weird to think of the Yankees no longer having that face of the franchise player. A lot was made about who would take over as the new clubhouse leader. The belief was that it is only a matter of time until Brian McCann becomes that guy. I’ve always heard great things about McCann and that wouldn’t surprise me at all. Brett Gardner and Mark Teixeira have spent a good amount of time in NY now and I would really like to see them step into that role as well.

Although no one had any real reason to believe the Yankees will make another big splash, they agreed to never count them out of anything. Given what GM Brian Cashman has done so far this off season, they believe he is relying heavily on his defense and the bullpen. The pen may be in great shape but Murti and Kepner both felt they need one, maybe two, more starters. Jaffe raised an interesting point that he could envision the Yankees making Andrew Miller the closer this season and keep Dillin Betances as the set-up man. His reasoning being that this will keep Betances cost down for another season as set-up men earn far less than closers. It’s hard for me to believe the Yankees would actually operate this way but maybe the times are a changing.

One thing that doesn’t change is AROD finding his way into the discussion. No one believes that the Yankees are ready to simply pay AROD to go away. Not yet at least. Murti stressed the notion that the Yankees received the lowest production out of the DH position in the American League last year. I was pretty shocked by that. He felt that if the Yankees want to maximize AROD’s production then he should be delegated as the teams full-time DH. I think Cashman all but assured us AROD won’t be playing much third base once he resigned Chase Headley.

Although I read/watch these guys do on a daily basis, it was great to see them interact in this type of setting. It’s fun to see their personalities come to life and get genuine emotion out of them. Rosenthal and Olney are two of the most recognizable figures in this industry. It was nice to see them loosen their tie up (bow tie in Rosenthal’s case) and just talk baseball in the bar as so many of us do. Jaffe even brought his beer on stage with him.

I strongly encourage fans to follow each of last nights panelist throughout the year.  They get to spend more time at home during the winter but there is no such thing as an off season for any of them. There is sure to be plenty more baseball to talk about on both a local and national level between now and opening day.

35 days till pitchers and catchers report. But who’s counting?